I have discovered the BEST backpacking treat ever, and I wish I could patent and market it somehow, because who doesn’t want to eat a SMELLYEO, ha ha!

Okay, maybe the name is not so appetizing – but it’s funny, which is even better. When you add Smore+Kelly+Oreo, you get a Smellyeo, and trust me, it equals a party in your mouth. But the key is using the THIN Oreos, and if they are a little stale and chewy, it’s even better. (And you HAVE to burn the marshmallow a little – the char is everything!)

My daughter and her boyfriend helped me come up with the name, so I need to give credit where credit is due. They have been my support drivers on several hikes, and some of my favorite memories are the long drives with them. I have raised my kids to have my sense of humor, so it makes sense that we easily volley back and forth with our often morbid and dark jesting – but what a relief that their chosen partners never bat an eye, and often jump in with the best inappropriate joke. (My DIL is the master! But Chuck is right there with her.)

And so the three hour drive to Mt. Rainier was filled with laughter as usual, and I had high hopes that I could knock of 10 of those 30 miles I skipped on my Wonderland attempt two years ago. Late June is not exactly the time to do anything on Mt. Rainier, but I found a little jem called “Steven Canyon Waterfalls” that quickly gets you on the Wonderland (.7) and to a camp spot (1 more mile) and from there I could just keep going clockwise to Longmire where we had abandoned ship last time. (see https://www.slowesthiker.com/blog/wonderland-fail/ ) Chuck and Amber could hike in and camp the one night, then back out to the car in the morning to drive to Longmire to pick me up and we could all have a lovely late lunch. Here are some things to know if you’d like to do this hike: 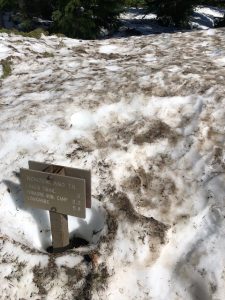 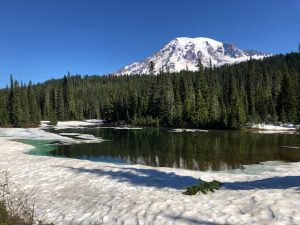 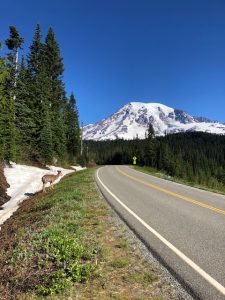 So there you have it. Now I have to go back to finish that little bit between Longmire and Reflection Lakes, then skip ahead somehow to get to Box Canyon to complete the Wonderland to White River. But that just means another fun road trip to look forward too! Happy trails and trail treats!