Good and Bad Decisions on the Wonderland

What do you do when you don’t get the permit you so painstakingly planned to obtain? In my determined quest to secure a spot at the most popular camp on the Wonderland, I committed and invested by:

So when it all falls apart, you contemplate cheating and stealth camping without a permit – if you are naughty like me, anyway. My determination (or you might call it stubbornness) can sometimes get in the way of my better judgement. But I reluctantly decided to be a good girl and just stay at the White River campsite by myself and day hike instead — call Amber and Chuck and tell them they don’t have to make the three hour drive after all. 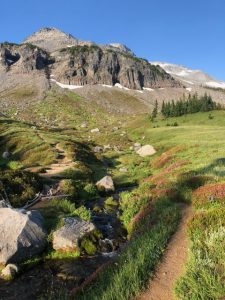 “Go with the flow, Kelly, and just be grateful you’re here,”…I tried to talk myself into having a good attitude, even though I was still recovering from seeing the coveted “Summerland” get crossed off the walk up permit list taped to the Ranger’s door just minutes after they opened it. (Sheesh, what’s a girl gotta do to be first in line? I missed it by two people.) 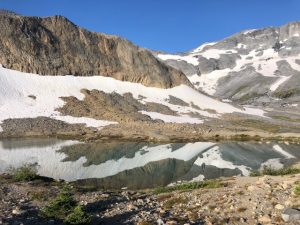 Then the “flow” took another turn. I overheard two other hikers who were doing the whole Wonderland talking about how they were staying at Summerland that night, and before I knew it I had invited myself along. Who does that? But they were SO welcoming…”Party at Summerland!” they announced jovially. But how was I going to make this work now that I no longer had a support crew coming? 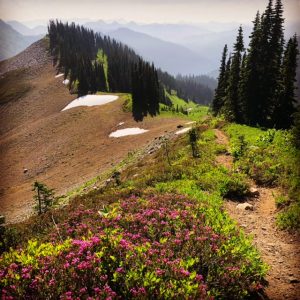 ZERO cell service meant using the “emergency/urgent” pay phone at the campground (yes it will work for a mere $16) and as I was having no luck with anyone answering, my chance at Summerland started walking away.

“Are you coming?” they asked.

I stood with phone in hand, nobody on the other end, and yelled back, “I’m just trying to make a good decision.”

They laughed in unison as one of them called back, “Screw that!”  These were my people! I had to go … good decisions be damned.

Those 19.3 miles were well worth the stress of not knowing how I was getting back to my car. And though my first EVER attempt at hitchhiking could have been worse, I would not recommend it. Standing in the hot sun and getting the “hell to the no” look for over an hour is more demoralizing than I could have imagined. But the trail provided once again, and a young lady road tripping by herself decided to head north instead of south to help me out, and ended up staying with me at that campsite I had snagged back at White River that had been sitting dormant for two days. My good and bad decisions aside – it all worked out in the end. May your happy trails do the same. (More detailed hiking log below if interested.) 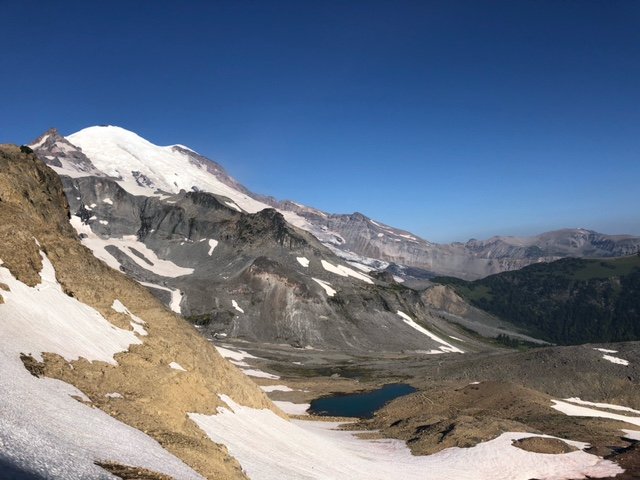 Day 1: 7 miles to Summerland. Passed FOUR rangers, so I’m glad I didn’t cheat! These miles are all up, but it’s not bad until the final mile or so. Funny story–as we were just getting snuggly in our tents, we heard a voice asking “Are you in there?” Ummm…why? Turns out we were being “evacuated” by a fellow camper because he saw a bear roaming through camp. We all gathered around the bear pole like it was some kind of fire drill. But just look at it!! (Pic below) A veritable motherload of jerky and God knows what barely above our heads – no wonder a bear came sniffing. (Though I couldn’t help joking to my new hiking friends that it was actually the aroma of my Smellyeos that had lured our furry intruder.)

Day 2: 12.3 miles to the Box Canyon parking lot. These are tough miles, though I think they would be more challenging going the opposite direction. The other extremely popular campsites at Indian Bar are just as beautiful, and could also work in splitting this long hike into two days. But if you are a bad ass like Glen, you don’t worry about permits and you just day hike the monster. (From Sunrise actually – an almost 23 miles day!) I would also suggest a key swap would work really well for this hike, and I almost convinced two ladies I met while eating lunch who were going the opposite direction into giving me their keys! (Glen put the kibosh on that as he interjected stories of having his garage door opener stolen out of his unlocked car…thanks a lot, Glen! ;)) And btw, I’m still not done with the damn Wonderland!(First attempt here ) I still have those 5 miles from Reflection Lakes to Longmire. Who knows when that will get done, but there’s dinner at Longmire for anyone who will drop me off AND pick me up 🙂